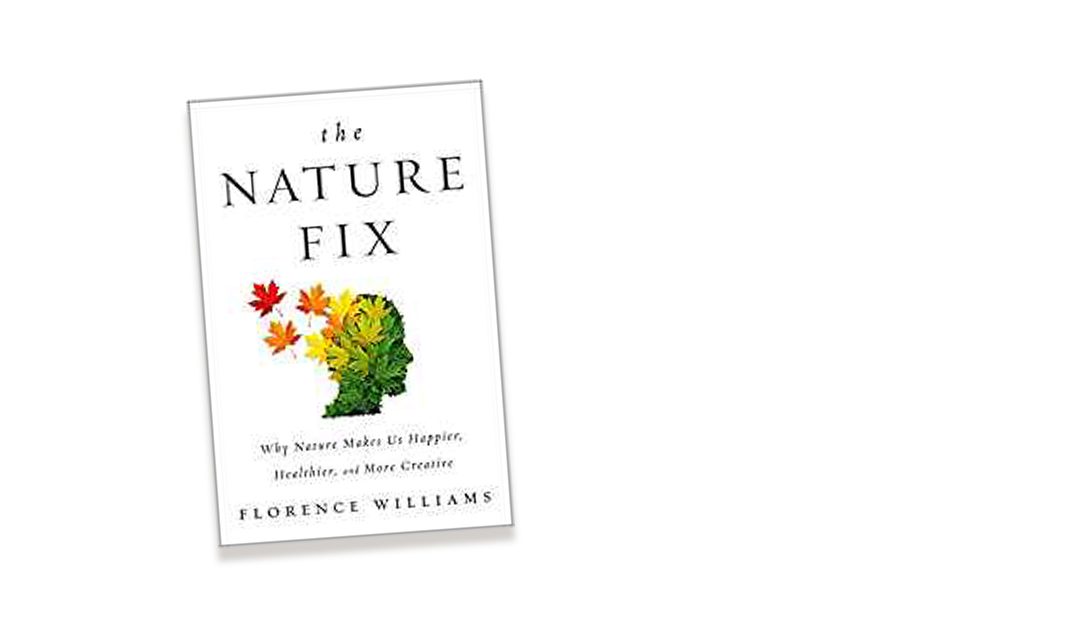 Going outside makes me feel good. It’s something I know in my bones. And it’s true no matter the weather. Actually getting dressed and walking out the door is often another matter altogether, especially on work days.

‘The Nature Fix: Why Nature Makes Us Happier, Healthier, and More Creative’ by Florence Williams is not about what we can do for nature, but what nature can do for us, and why we should take nature up on the offer.

From the dust jacket of ‘The Nature Fix‘:

For centuries, poets and philosophers extolled the benefits of a walk in the woods: Beethoven drew inspiration from rocks and trees; Wordsworth composed while tromping over the heath; and Nikola Tesla conceived the electric motor while visiting a park. Intrigued by our storied renewal in the natural world, Florence Williams set out to uncover the science behind nature’s positive effects on the brain.

In this informative and entertaining account, Williams investigates cutting-edge research as she travels to fragrant cypress forests in Korea to meet the rangers who administer “forest healing programs,” to the green hills of Scotland and its “ecotherapeutic” approach to caring for the mentally ill, to a river trip in Idaho with Iraqi vets suffering from PTSD, to the West Virginia mountains where she discovers how being outside helps children with ADHD. The Nature Fix demonstrates that our connection to nature is much more important to our cognition than we think and that even small amounts of exposure to the living world can improve our creativity and enhance our mood. In prose that is incisive, witty, and urgent, Williams shows how time in nature is not a luxury but is in fact essential to our humanity. As our modern lives shift dramatically indoors, these ideas—and the answers they yield—are more urgent than ever.

Florence Williams is a journalist and contributing editor to Outside magazine. An accomplished writer, she lives in Washington, DC. Her move there was the inspiration for ‘The Nature Fix‘, as she left behind the wilderness of Colorado and despaired of her new environment in Washington. It was in feeling listless and unfocused, yearning for the mountains, she began to explore her loss.

“This book explores the science behind what poets and philosophers have known for eons: place matters.”

‘The Nature Fix’ is written in five parts:

– Nearby Nature: The First Five Minutes

– The City in a Garden

This part explores the dominant theories that attempt to explain why nature is so vital to us – the science behind our responses.

Williams weaves the laboratory discussions and her own scientific participation into friendly conversations with ‘real people’ terms. The education feels far more like a chat amongst friends that a university lecture. It’s easy to understand and relevant to us who make our livings at our computers.

She writes, “Attention is our currency, and it’s precious.’ The science reveals that we’re able to focus on a maximum of four different things at a time and not very well at that. Directed attention, our focus, is a limited resource and when we draw on it too much, we make mistakes.

We engage three different networks when moving through an environment. The executive can be thought of as all business; spatial defines how we move around; the default network is where we daydream. The executive and the default don’t work together – you can only do one or the other. (Hmmm…. rethinking adding time to daydream into your work schedule?)

Nearby Nature: The First Five Minutes 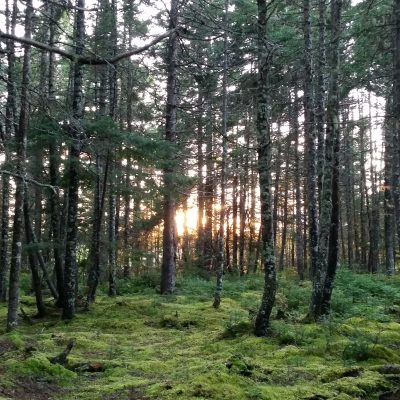 Williams traveled the globe to meet with scientists researching nature’s effect on us. She went to Japan and Korea to experience shinrin yoku, ‘forest bathing’. These countries plant forests of cypress trees, known for their sharp, tangy scent. Williams noted, “what these woods lack in biodiversity they make up in sensory delight and, increasingly, human medical use.” The odor is said to reduce stress 53% and lower blood pressure 5 – 7%.

She traveled the States, including a visit to Pennsylvania State University to discuss how the sounds of nature affect us. There scientists advocated short nature-based interventions as more efficient than meditation, a practice many struggle with. (That lunchtime walk outside is “an acute stress intervention”!)

Williams also explores how the sight and colours of nature buoy us. The numbers agree: recent studies link nearsightedness with the number of hours one spends outside. Our eyes are simply not as happy when they’re stuck inside staring at computer screens all day

In traveling to Finland, Williams found the minimum time we need to spend outside per month.

“To the Finnish, being outdoors in nature isn’t about paying homage to nature or to ourselves, the way it tends to be for Americans. We fetishize our life lists, catalog peaks bagged and capture the pristine scenes of grand wilderness…For the Finnish, though, nature is about expressing a close-knit collective identity.”

While the average Finn engages in nature-based recreation two to three times per week, five hours per month is the minimum we need to spend outside to get positive effects. Ten hours is even better to elevate your mood and stave off depression, engendering feelings of restoration, vitality, and creativity.

Williams explores the double-edged sword of technology, enabling progress but changing who we are. She joined researchers in the deserts of Utah to explore our response to wild landscapes and our transcendence when we are immersed in nature. 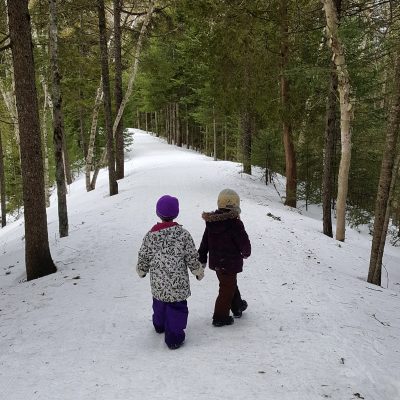 She shares campfire conversations where university students and researchers discuss Muir and Thoreau and oxytocin receptors. Her host, a professor of psychology, says, “At the end of the day… we come out in nature not because the science says it does something to us, but because of how it makes us feel.”

She shares a whitewater raft with recreation therapists military veterans suffering from posttraumatic stress disorder, where those affected by death once face it again in rapids and canyon walls.

Williams also climbs walls with children labeled as troublemakers, diagnosed with attention deficit and hyperactivity disorders. In their innocence, they openly share how they hated nature and going outside before their parents enrolled them in outdoor adventure-based boarding schools.

The City in a Garden

Williams wraps ‘The Nature Fix’ up with an exploration of our current situation, our ever-increasingly urbanized world. She’s honest without offering any disparagement of our swelling cities, acknowledging, “City dwellers typically experience better sanitation, nutrition, education, gender equality and access to health care, including family planning, than their rural counterparts.”

She has incorporated ‘the nature pyramid‘ into her own outdoor practice, and with her introduction, it’s something I’ve started to do as well. The nature pyramid suggests daily exposure in small doses around our neighbourhood, visiting wilder places where the sights and sounds of the city recede at least once per week. The pyramid moves up higher to those places that are more difficult to get to, wilder still, where we can truly escape.  The acme is the yearly or biyearly bursts of outdoor adventure, such as camping trips and multi-day expeditions.

“Health care is only a piece of the solution. The access-to-nature movement also ideally needs to grow out of schools, churches, workspaces, neighborhood associations and cities as a whole.” 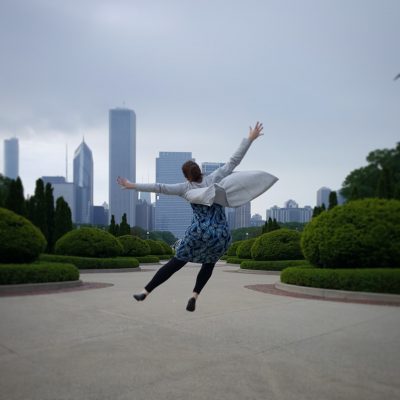 I could tell at times that there was so much great information she wanted to share throughout the book that she just had to jam it in. Although there is plenty of science, facts, and figures, I enjoyed reading this book because I felt like a conversational participant.

I also found value in affirmation. One of the basic principles of my business is creating more time for clients to go outside. I try to incorporate the outdoors into my own daily routines (some days are easier than others). I can see that science backs my intuition, that fresh air does mean fresh thinking as well as better health and improved mood.

This book is a great read for anyone interested in our environment as more than a bucket list, those who help others to be their best self or anyone who wants to incorporate the outdoors into their own daily practice. If you work with a boss, you could give them a copy of ‘The Nature Fix‘ as proof you should have walking meetings or an office with a window!

Looking for more inspiration to get you out the door? Have you tried our outdoor inspiration quiz? 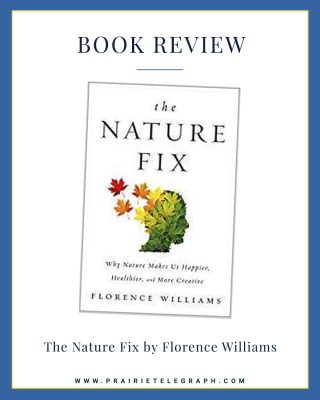